Inspired by the exterior lighting of historic European buildings, this award-winning project involved a contemporary two-storey addition to a 1930s character home in North Perth.

Owner and designer Jason Saunders, from arc seven.1, says the aim was to create a light, airy, versatile structure that can meet the family’s need for both living and professional spaces, while going well beyond Western Australia’s sustainability standards.

The result is a renovation which has converted the inefficient original home into one that exceeds seven stars in energy rating across the whole building.

“The home’s design emphasises the connection between indoor and outdoor spaces, while the lightweight cantilevered first floor projects out into space, seemingly unsupported, adding to its overall light touch,” Jason says.

“The versatility of the design will also allow meeting and studio spaces to be readily converted to adapt to the family’s changing needs.”

Having bought the house in 2009 and with twins on the way, the Saunders had their work cut out for them.

Jason says the 1937 Art Deco bungalow needed to be extensively renovated and extended to allow for a growing family as well as provide space to run a busy design practice.

The couple was determined to create a seamless, contemporary addition to their character-filled bungalow, which sits on a 490sqm block with a 12m frontage.

“It had to be an energy-efficient, light-filled space that allows both the family and the family business to expand, without detracting from the original single- storey home, and still allowing space for the kids to play outdoors and the family to entertain,” Jason says. 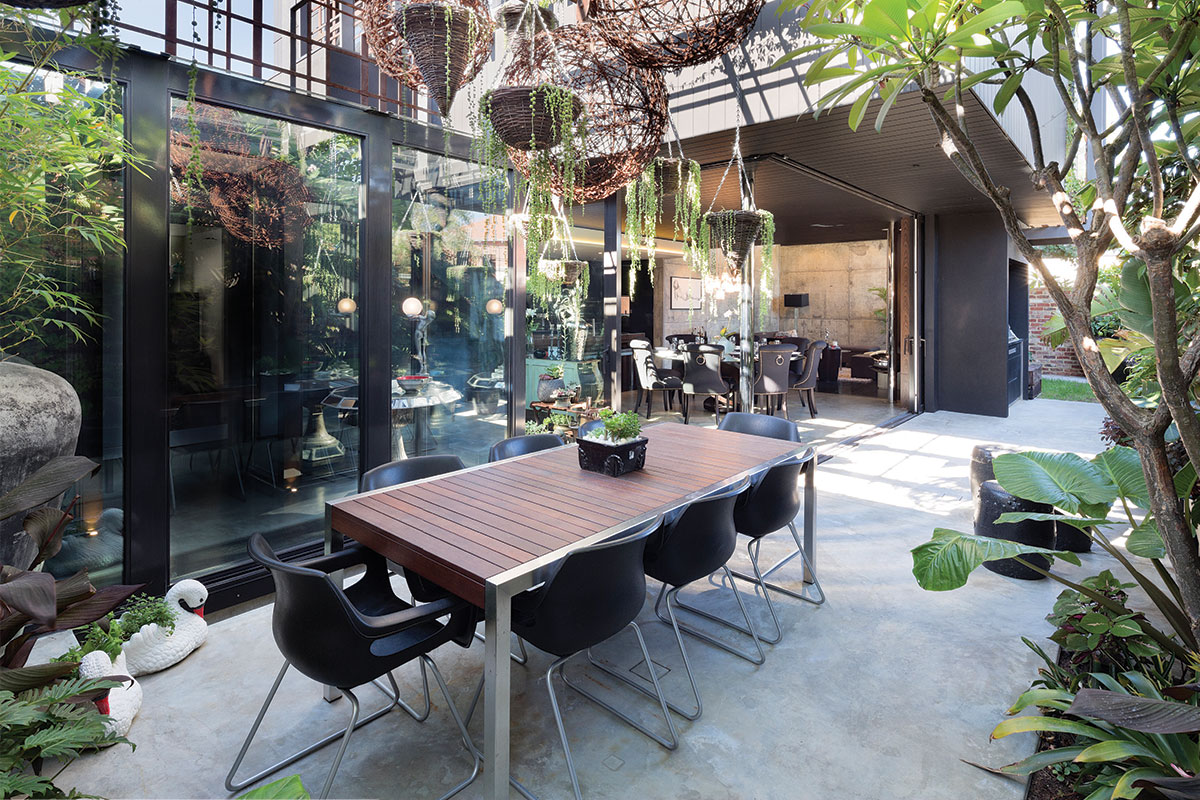 Their overriding desire was that the new addition would give them all of the additional space they required without imposing on the surrounding houses, or the original part of the house.

A lightweight double-storey addition was proposed for the rear of the property, with a first floor that appears to float unsupported.

The floating effect was achieved by the colour palette and the design, which pays homage to the existing house as well as allowing the first-floor space to be maximised, without adding to the building’s footprint.

The new addition provides an open, flexible, contemporary space, containing living areas and children’s playrooms on the ground floor as well as three bedrooms, a bathroom and storage space on the first floor that could potentially later be converted to other uses, such as play areas.

Jason says it is painted black to keep it from visually dominating the old house while the clever use of natural materials, organic timber and metal screens helps anchor the new structure to the ground, and forms a harmonious connection to the old house.

“This relationship between old and new is enhanced by a glass box linking the two and appearing to float over a serene, lily-filled water feature; walls of glass also fill the work spaces with natural light and warm winter sunshine while strategically positioned screens, insulation and cross- ventilation ensure the home remains comfortable even in the hottest months,” he says.

“The connection to the outdoors is emphasised by the water feature that flows under the glass cube to the exterior entertaining area, and by extending decorative cladding used on the exterior of the home to the interior, where it forms the ceiling of the dining room and pays homage to the decorative features that characterised older homes.”

arc seven.1 won the 2015 Building Designers Association of WA award for Design Excellence for this property.