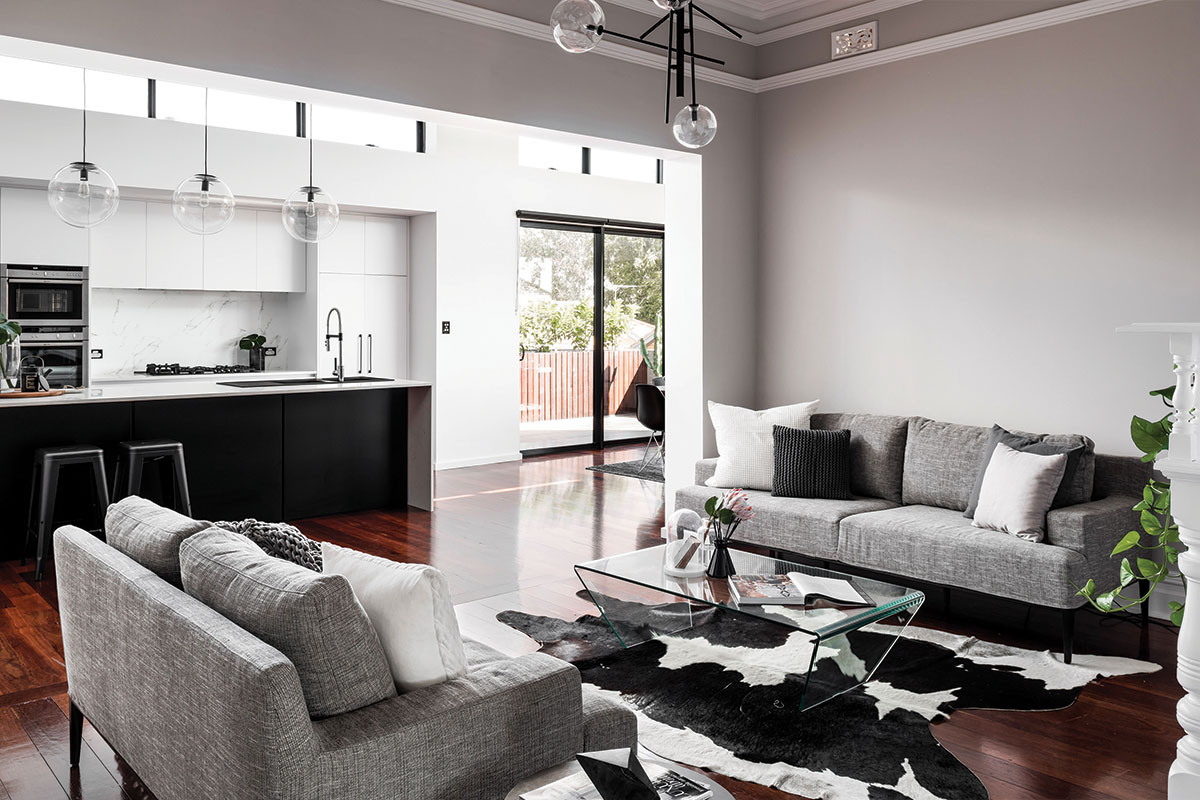 Transformed from tired and rundown into a stunning entertainer’s dream, this Federation home is now a light, bright liveable space with open-plan living, spectacular city views and indoor-outdoor connection.

Renovated by Dalecki Design, it is child friendly but also includes a luxurious master retreat where adults can escape to the sanctuary of their own private space.

Janik Dalecki, the brains behind the project, says the inner-city location means congested streets so allowing for two off-street car bays was a priority.

“Overall, a fast and cost-effective construction was also paramount, so it was imperative that the design and materials selected supported this,” he says.

Janik says the aim was to create a versatile, adorable home for resale. And so he transformed it into a modern three-bedroom, two-bathroom abode with north-facing windows to capture and disperse natural light throughout the living zones.

Large sliding doors open the living area to the outdoors, creating a flowing indoor-outdoor connection and transforming the central living area into one large entertaining zone.

The sliding doors also frame the city views, allowing them to be seen from all entertaining areas, both indoors and outdoors. 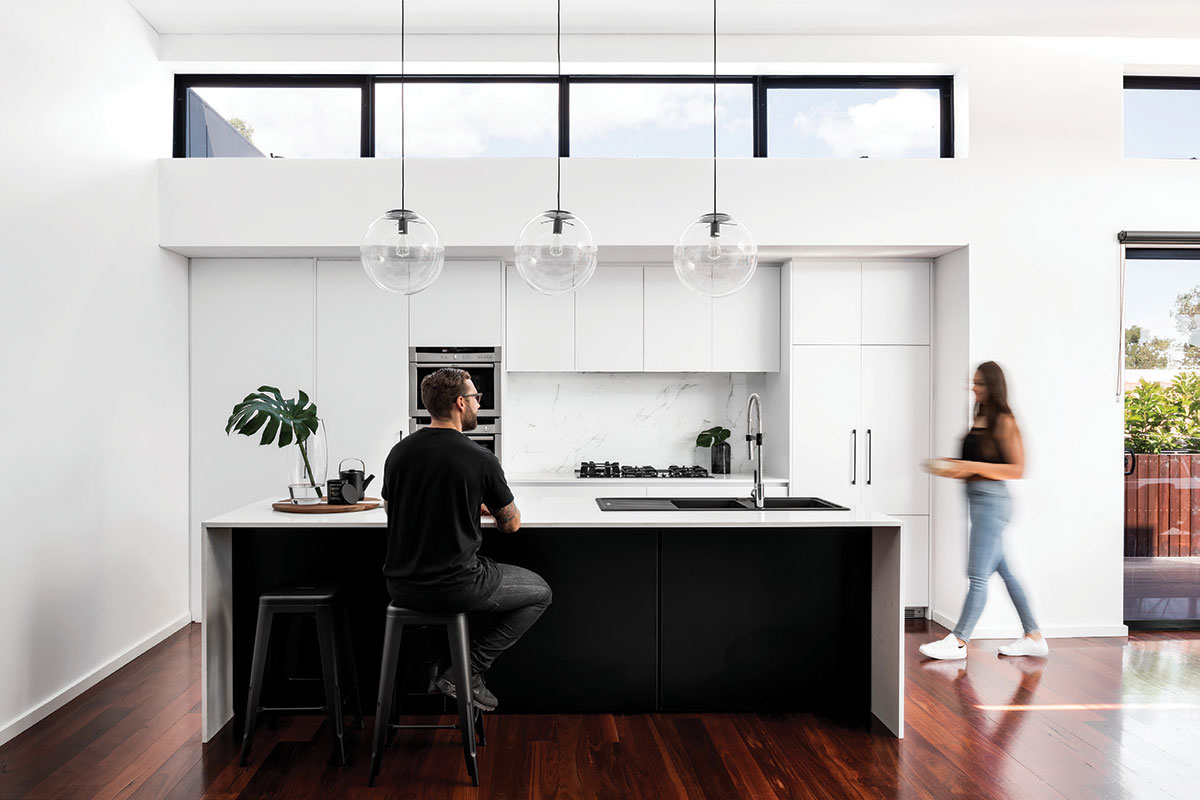 The sleeping areas have been divided into two distinct zones. The main bedroom has been positioned to the rear, providing a sense of privacy, while the two existing front bedrooms are now serviced by their own bathroom, providing a much more practical layout.

“In order to let the intricate heritage details of the original home shine, the addition incorporates contrasting materials and sharp, minimalist lines to create a strikingly modern form,” Janik says. “Whilst this creates a clear definition between the old and the new, a neutral colour scheme and the use of existing floorboards throughout provide a seamless transition between the two eras.”

The project has seen some major triumphs, including taking out the gong for best residential alteration and addition between $350,000-$800,000 at a Building Designers Association of WA Design Awards.

“Too often you see people knock these older houses down as in many instances it’s cheaper and easier to knock down and build a standard project home rather than restoring a gem like this,” Janik says.

“If you look throughout Perth, you can see many examples of where these older houses have been knocked down and multiple new houses built in its place, which I think is a huge shame when personally I believe there could be a better approach.

“I think it is really fantastic to see someone willing to take the time to renovate a little piece of Perth’s history and work around it to create a new home to suit our modern way of living, which will hopefully stand for another 100 years.” 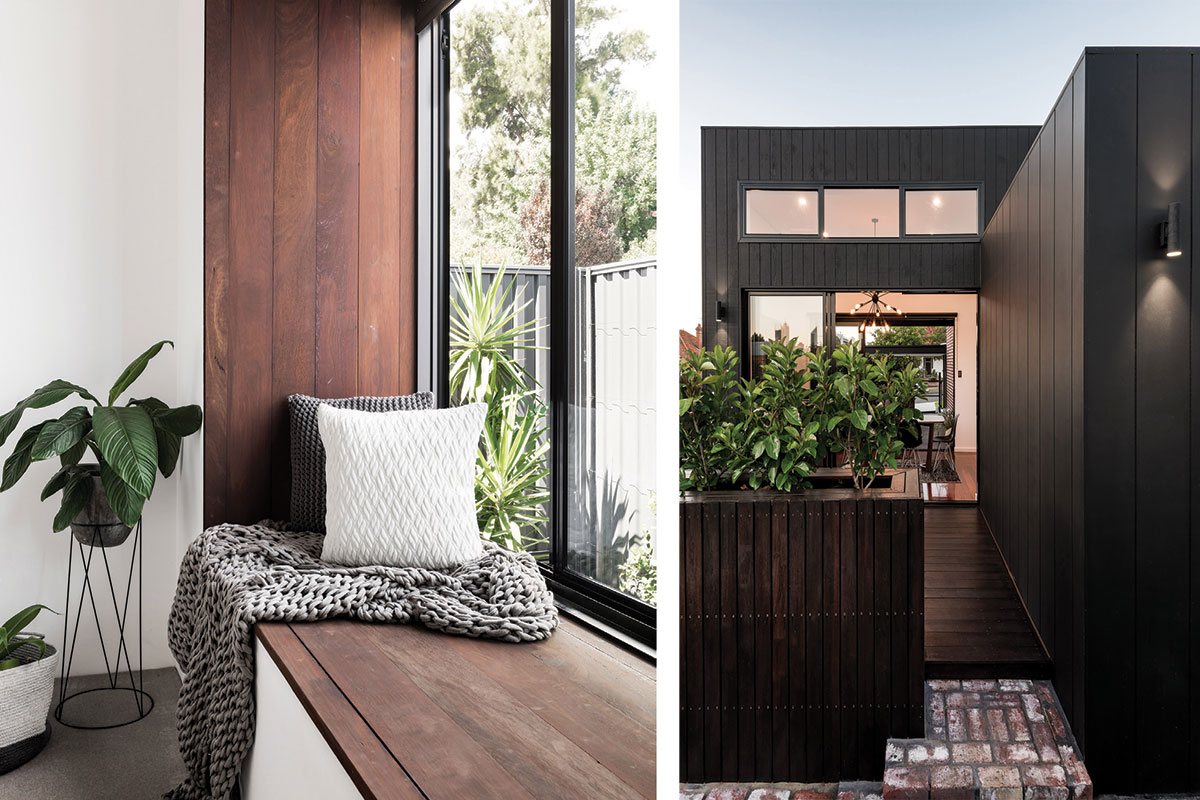 Janik says some of the really special areas in the house are actually features from the existing dwelling, which were retained and restored.

“Two of these features being existing fireplaces, one of which is now located in the new bathroom and the other is located in the master suite walk-in robe,” he says.

“The high ceilings in the additions and the use of the highlight windows are stunning. The natural light that floods this space and the breeze that passes through in the late afternoon in summer is fantastic.

“The day bed in the master suite is also a favourite feature of mine. It is extremely inviting and creates a beautiful space to sit and sink into a good book. The skylight above the ensuite shower is pretty stunning too.”

To find more about Dalecki Design visit the website here.