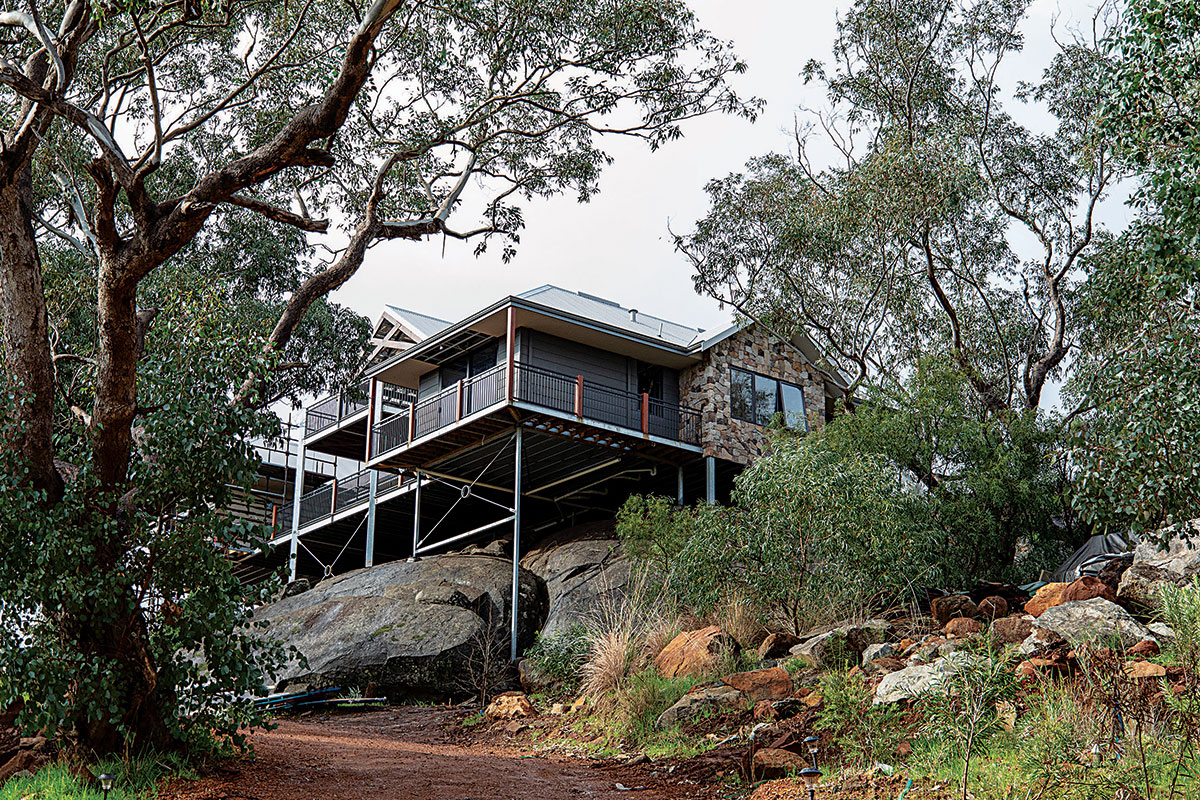 They say when you want something done properly, do it yourself. And that’s just what Home Base Owner-Builder Support Network members Ro and Ian Dawson did when they found their dream block, high in Perth’s Hills on a site that many people said was near impossible to work with.

Perched atop what has been dubbed Perth’s steepest street, the block slopes dramatically. Sitting on a massive boulder at the top end of the block and looking out at the amazing view, Ian and Ro decided they had found the exact spot to lay the foundations of their new home.

But the experts shook their head in disbelief and said it couldn’t be done.

But the first-time owner-builders would not be deterred and so they set about the mammoth task of building a home that essentially was balanced on a rock.

Ian says the process has definitely been a labour of love but it has been worth the blood, sweat and tears.

He says everyone who visits the site is blown away, not just by the views but by the engineering required to get a house to balance on a rock.

The home, still very much a work in progress, is nothing short of spectacular. Inside, it will boast beautiful salvaged wood, stunning marri floors and endless glass to capitalise on the views.

Ian and Ro have done a lot of the hands-on work themselves and say that process has made the project even more special.

“We couldn’t have done it without the Home Base Owner-Builder Support Network,” Ian says.

“It’s a big thing to go into something like this and it is important to have some support and direction there when and if you need it. It has definitely been a big learning curve and one we’re really proud of.”

Ian says it has paid off keeping an eye on all stages of the process and working closely with the tradespeople.

“When it is your own project, you can see every little detail unfold and if you are on the ball, you can pick up any problems early,” he says.”Inevitably, there will be little things that happen here and there but the key is to get on top of them before they become an issue.”

Ian says people in Perth still have not fully embraced the idea of alternative construction methods but when you get your head around the options available, it is quite liberating to not have to work with bricks and mortar.

“It opens up so many more possibilities and this project just proves that,” he says.

“This house is as strong as they come but it’s not built with bricks. It is a dream come true and I can’t see us ever leaving.”